So yesterday SR posted results of a personality test.  The left brain/ right brain one.  He was 60/40 with the higher being the left brain.

I clicked it and decided to take it, assuming I would be the exact opposite or 20 left/80 right.  It was about 12 questions and I answered them.  My results came back.

80% left brained?  "I am logical, analytical and rational."

Logical, analytical and rational?  Ok, well I guess I DO try to stay calm instead of emotionally explode most of the time.  I will often try to see someone else's side in an argument or confrontation- simply because taking into account the other persons point of view just helps everyone.  I AM a pretty decent problem solver when things are a mess.  I have this process of looking at the problem from all sides and taking into account all the people involved and deciding what is more important and who benefits and all that.  It's quite effective.  I RARELY make snap decisions.  I'm never one to just say "hey lets do it!" without thinking about all the stakeholders in my life and how it might effect them.

But does that mean I'm logical?  Of course not.  A rational person doesn't.... well, I know I've done something irrational lately.  Haven't I?

I guess my point is that I don't usually consider myself one of the 'smart people.'  I get lost in my own neighborhood and I have no idea which way is north unless I am looking at a GPS which tells me which direction I'm going.  Everywhere I go is "up".  I go up north, I go up to San Diego, and apparently San Diego is south???  All my life, Riverside was East, because you had to take the 91East to get there.  But now that I live in Riverside, I have no idea which way East is.  And if I'm not on the freeway, forget it!!

I have been happy to assume that I've been "capable dumb" my whole life.  Maybe I used to be that way- it's hard to remember what I thought of myself before my 30's.  I am not sure if I am, or if I have just believed it because maybe that's what people told me.  Whenever I do something impressive, people assume it's a stretch for me.  Or maybe I just make that assumption on my own and have been trying to sell it to people- and well, I can be a pretty decent salesperson, but I always assumed that was because of my boobs.

I've been too much of a slut to be left brained, haven't I?

I don't think being left brained means I'm smart.  I understand that now.  I think it means that maybe I'm not as dumb as I thought I was.  If I take a moment to look at my life, and my achievements, I guess everything points to Not Dumb.  So why am I so hesitant to believe that?  Even when people point out those achievements, I brush them away with bird brained reasons for why I did it.

My friends don't think I'm irrational or illogical.  I doubt they think I'm smart, but I don't think "dumb" is what comes to mind either.  I'm just Julie.  I'm my own descriptor.  Capable dumb.  Yes, that is a term I'm comfortable with.  That's probably not a good thing though.

I feel like maybe I have spend a lot of time thinking that smart people are humoring me.  There was a friend of mine, I called him Jack, don't ask, and he was mega smart.  He used to talk about all sorts of things that were over my head.  He never really let me get away with thinking I was too stupid to have a conversation with him.  (Conversing wasn't exactly our thing.)  He would talk to me about whatever smart people talk about and I would do my best to follow, and if he saw a blank look on my face, he would keep talking and then curve the conversation around to explain whatever it was that he lost me on.  He was super cool that way.  However, I always thought he was just being polite.

So now I have to figure out what this all means, and if it has had any effect on my life.  I think I AM left brained, based on the theory of what left brained means.  But what has been the effect on me from thinking I was right brained all my life.  Are my talents unused.  Have I missed opportunities because I didn't have the confidence to think I could succeed?

It's all so double rainbow for me.
What does it mean?? 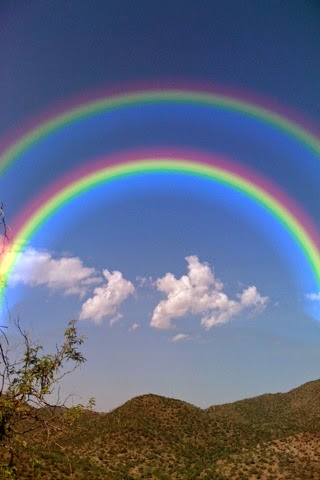