This past week I experienced the horror of the Siberian Husky escaping artist act- twice.
Well, more like one and a half times.

Actually, it wasn't very horrifying at all- but I did get a taste of that sinking feeling of "when your dog gets out of the yard."

Lets get a few things straight about Max.

Max was not the dog I wanted.

My best friend has huskies, lots of them.  She has trained, bred and showed huskies.  The first time we visited her house, SR fell in love with her dogs and decided that THIS was the dog we should have.  That a 75 pound, extremely needy, very social dog would be a good dog for our house with two boys who were afraid of dogs.  Me?  I thought a smaller dog, a beagle or even a breed of cuter yappy dog would be good.  Something the kids could get used to because he wasn't LARGER than they were.  However, what SR wants, SR gets and 9 months later we brought Max home.

He was a very cute puppy.  Loving and fun but loud and more hyper than the kids.  They were immediately terrified because he was unpredictable.  I can't quite explain the reasons my kids are so afraid of dogs, because neither have ever been in an altercation with one.  Well, that's not totally true.  My parents neighbors have this really yappy poodle that thinks he's a rhino or something.  He chases after the kids, barking and being "menacing."  But come on, it's a poodle.  It's loud and seems aggressive, but that little shit came up to me once barking as if being in my mothers driveway was such a hassle for her- so I walked towards her, with all the aggressiveness  you need to come face to face with a poodle and that bitch ran off.  My dog shits bigger than you, punk.  Back the fuck up.  Anyway, the kids did not want anything to do with Max- and still don't.  They enjoy watching the adult interactions with Max through the sliding glass door, but that's about as close as they want to get.  My CAT is not even afraid of this dog.  He's lovable and wouldn't really hurt anything intentionally.

Unintentionally, of course, he's the master of disaster.  The sheer speed at which he runs cause tree branches to bend and grass to cower back under the earth.  If he can reach it, he will chew it and if it's small enough he will swallow it.  When he was a pup he swallowed a sock, which was very dramatic for the family- but since his stomach has developed a bit- he will now eat just about anything.  He has chewed curtains, jeans, towels, stuffed animals, bike seats, extension cords, hoses, barbeque utensils, and the sleeve of SR's favorite jacket. Usually this is because of boredom or poor crate placement.

It was never my intention to be the primary caretaker of this monster.  Yet that seems to be what has transpired.  Despite my best efforts and a vehement statement that I am not a dog person, the care of Max has mainly fallen to me.  Let me tell you about me and dogs.  I grew up with Dobermans.  So being around big dogs is not new.  However I have never really been a fan.  As a child I was short and skinny and weak.  Big dogs could knock me over with little effort.  The Dobermans I had were generally NOT jumpers and were pretty calm around people, unlike Mr. Max.  As an adult, I realized I am much more of a CAT person, and while I do like dogs, they are usually far too demanding for my liking.  They take up too much time and space and attention that could otherwise go to me.  All that being said, I have learned to love this big dumb dork and am now taking a much more serious approach to this whole "dog thing" than I had before. 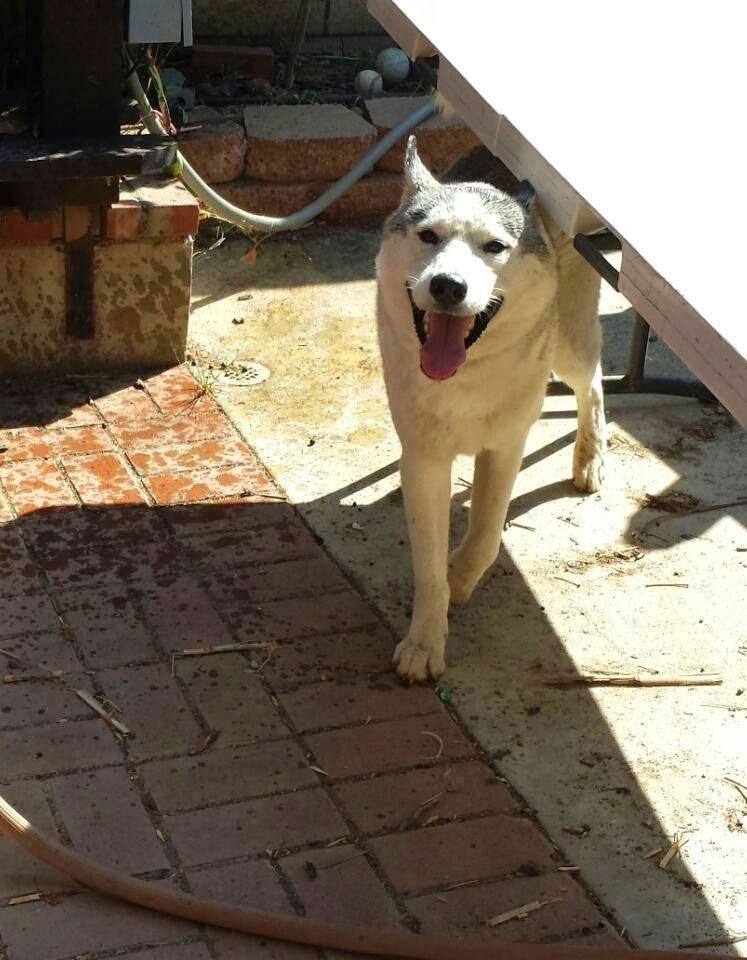 Max is a year and a half now.  Still destructive, but getting better.  I admit he was not properly trained- and because the kids are still terrified of him- he is not allowed to roam the house.  We tried to make him a mostly outside dog, but with the tick infestation in our area, that has become a thing of the past.  I am now obsessed with making sure he gets treated for ticks- as well as spraying the yard and I can't be around him for a few minutes without checking his ears and his huge feet for those disgusting little things, even if I checked just a few minutes ago.  But he enjoys being in his crate (he's a den animal after all) and he often whines himself into getting scraps of our dinner- including a whole rack of ribs that were not so great for people but perfect for him, and New York Steak, because there was left overs.

We let him run around outside for several hours in the morning and before bed at night so he can run off some energy.  I try to hang out with him as mush as the heat and my  boredom will allow.  We have a big backyard and he runs the distance of it several times at top speed.  The other night I called him in and he didn't answer.  I went outside and he still wasn't coming.  I can usually hear him before I see him, the thu-thu-thump, thu-thu-thump of his stride, warning me to plant my feet incase he decides to do a running leap at me.  Nothing.  Shit.

So I put my shoes on and remember the words I have heard and read.  Huskies are escape artists, and once they get it in their heads to escape, they will wander, and if they see something to chase, they will chase.  And keep chasing.  Shit.

In a matter of 30 seconds my mind is going wild with visions of me driving up and down my neighborhood looking for a husky running faster than my car is supposed to go in a residential area.  I remember that he's chipped.  I hope he hasn't accidentally killed any of the unfortunate stray cats in the neighborhood, again.  I hope he hasn't gotten hit by a car.  My eyes start to well up a little.

Shoes on, I head for the door, cellphone set to flashlight mode.  Porch light on, I open the front door.

There's Max.  Trotting up the porch looking, well, bored.  Hey mom, can I go to bed now?  GAH!!!  You ridiculous dog!!  He didn't even go anywhere.  Or if he did, he came back.  Either way- he was safe at home.  I would have scolded him if I thought he knew what he was being scolded for, but I hugged him instead.  I noticed a lifted slat in the fence.  ONE lifted slat.  How my big dog slithered thru a slat I couldn't fit my calf through- I don't know.  Huskies don't really slither, you know?  My best friend said they must dislodge their shoulders and hip bones.  I'm not even sure how he got his head through it.

Two days later I am headed to the store with Jerkface.  I didn't want to get dressed so I was still in my short nighty and Jerkface will run into the store and buy the coffee creamer for me.  So I round the corner and look- there's Max.  What the???  I fixed the slat in the fence and- damn it!!  So I stop the car and get out.  In a short nighty.  No bra.  No shoes.  This is lovely.  Max runs over, and passes me.  I call him, leaning forward with my tits AND my ass hanging out.  Calling my big dumb dog.  He finally comes by me once more and I grab him and then walk him back home.  Jerkface is terrified I'm going to put Max in the car with us so I just walk him home.  No, it didn't occur to me to make Jerkface wait outside.  So while I didn't want to walk into the grocery store in my short nighty- apparently walking my DOG is ok.  Super.

Yesterday, we bought new slats and replaced the fence.  Ha HA Maximus!  No more unsupervised walkabouts for you!!  But look!  I got you one of those squeaky toys that you love so much that you chew the squeak right out of!!!
Posted by Julie at 11:12 AM