The kids are eating WHAT?

Really?  Laundry pods?  What in the ACTUAL hell is wrong with kids these days?  I have seen meme's all over about it, and today I looked up if it was an actual real thing.

OMG, it's true.  Todays youth is so stupid that they are eating laundry detergent, for an internet joke? 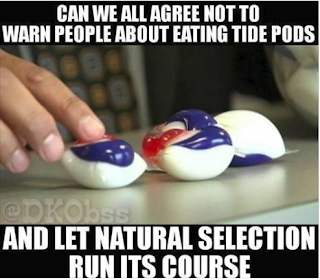 I really think this is the answer.
This has been a running joke since 2013.  However I'm not entirely sure at what point people ACTUALLY started eating them.  However a story came across my feed that about 40 people have been poisoned by them, THIS YEAR.  It's only the 18th people!
I wonder about the parents of these kids.  You know someone is going to blame the internet for this.  I just wonder when I'm going to see the first post come across my facebook feed from a distraught parent, warning other parents about the dangers of internet memes.  Then they will tell us in horrific detail about how their child was poisoned, because they bit into a detergent packet.  Probably start a gofund me, for the medical expenses because their child was not smart enough not to eat LAUNDRY SOAP.  Give it time.
Do kids not get their mouths washed out with soap anymore?  Is that why this is happening?  I would think that anyone who has ever had to bite into a bar of ZEST will know, without a doubt, anything that smells like soap does NOT go in your mouth.  It's something that sticks with you, and you NEVER forget that.
I have read a lot of stupid things on the internet, but this has to be in the top 10.
Jerkface (age 15) came out today and said, mom, I saw this thing on the internet, that kids are doing.  And I said "Eating Tide pods" and he said "Yes, oh my god.  Why are people so fucking stupid?"
It's nice to have the occasional reminder that I didn't raise an idiot.
Posted by Julie at 6:33 AM