Last night a commercial for that movie 2016 came on TV.  The one that says Obama is a bad guy.

Now I've been an Obama supporter since the beginning.  I admit it.  His speeches inspired me, and continue to do so.  I don't have political conversations with SR because he is NOT an Obama supporter.  This doesn't mean he's a republican, cause he's not.  When the commercial came on I was engaged in something (I think it was DragonVale) and I looked up and groaned.

He said to me, rather emphatically, "You'd discount someones RESEARCH purely on your bias towards Obama?  Don't you think you should at least CONSIDER the research."

I shrugged off the conversation- tried to avoid it really because I do not like talking politics with SR.  He has strong opinions and while mine are not STRONG, I know what I feel and believe it or not, I think the country could USE some inspiration.  I did some silent thinking on it though, and this morning when I logged on to the internet I was poking around at all the different things you can find that talk about what a crisis this country is in.  It was these two things that popped up on my twitter feed: 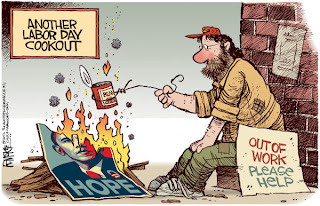 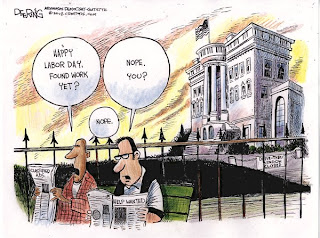 ﻿
You can see more of Daryl Cagles Cartoons and Commentary here.

There's also different things I've seen about people in student load debt who can't find work.  People in GENERAL who can't find work.  So many people I know struggle getting by, employable, educated people who should be able to find a job or people WITH jobs who are scraping by.  Gas prices going up, food prices going up, quality of life going down.  Health care, don't get me started.  As a health care professional, I am FOR socialized health care- but I don't know all the details.  In theory, it seems as if people had to be responsible for thier health care- the overall cost would go down due to preventative maintenence and less emergency medicine.  Uninsured patients simply COST more to care for because often their medicat situations are so bad because it's gone untreated for so long.  What does socialized healthcare mean?  Well it means increased prices for the rest of us.  I get that.  It hits small businesses HARD, and this is America, we should not be penalized for starting companies.  I don't know all the ins and outs of what socialized medicine should be.  However I know it works in some countries, and in those countries, nobody goes into bankrupcy because someone got sick.

In some ways I still live in a bubble.  I look at how MY life is affected.  Well, I have two jobs right now and one of them I can do from my home.  Yes, I have a boatload of student loans and while I don't know how long it will take me to pay them off- it's nice to know that I can al least make a paltry effort to pay them back.  However, I know what it's like to scrape by.  I know what it's like to NOT eat, so my kids can eat.  I know what it's like to have to decide if I'm going to put gas in my car or have money for two more days of food.  It sucks.  And there are lots of people who are going through it.  Far too many people who should, for all intents and purposes, be able to find enough work to get by- can't.

So this country is not in a great place.  I can look around and see that.  Perhaps I'm TOO patriotic and think "This is America, it will all work out."  I'm mildly offended by people who say "America sucks, I'm moving to another country."  Yeah, go ahead.

The commercial last night, and actually taking a look at just the few things I could find in a half hour lets me know that maybe the inspirational talks are not enough.  Somewhere there's some policies that are not right.  Programs started by the current administration that have fucked things up for all of us.  Do I blame the president?  No.  I understand enough to know that as the President there's only so much you can do.  However, he should be accountable for something right?

I won't vote republican, mainly because of thier gay hating, wanting to control my vagina thought processes.  I don't fly on that wing.  However, perhaps I should take a deeper look at the administration that I DO support.  It's hard to find reliable information because each side paints a very ugly picture of the other side.

I don't know that it willl make me WANT to have a political conversation with SR- but if I get roped into one, at least maybe I can have a better answer than, "I dunno."

I've NOT been an Obama supporter since the beginning. I have reluctantly voted for him once, and will reluctantly vote for him again. The problem with him is that it is a lot of inspirational talk with NO actual movement toward what we need in this country. Last Presidential Election it was me voting for the lesser of two evils. This election the Right are even worse, for exactly the reasons you mentioned. Gay Hating, Woman's Rights abridging bastards. However, sadly, the Left has also become worse. They are still better than the Right, but ONLY because of those two key items mentioned. I would love a Reagan Republican right now (compared to our current options), but more-so I would really love a Libertarian candidate who had a fighting chance. Sadly, until a true Revolution occurs here, we will always be a two-party system. Funny, even my political views seem to be a tad "ambiguous". lol.