Working on that plan

I was hoping to have a plan written down for some work-life balance.  A work-life balance PLAN.  I don't have it yet.  Hopefully in a month I will have more at home work to do and less time will be spend delivering food.  It's hard to make a plan that I know is going to change.

Today I made a point to tell Bonehead- who is now 15, by the way, that I appreciate him helping out with the dogs while I'm working during the day.  And making dinner either for himself, or for everyone.  I know it's hard on him when I'm not home.  I told him he was doing really well and was a great help to me and that I APPRECIATED him.  He thanked my acknowledgement with a hug.  He's become a moody teenager, but I know when things are bothering him.  I see the look on his face when I tell him I'm heading off to work.  He sometimes says, "are you ever just gonna work at home again?"  It breaks my heart.  I joke with him and say, "well, you want to eat don't you?"  He doesn't know I'm not really joking. 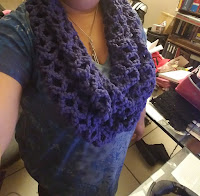 I have started taking my crochet projects with me on my shifts, so if I happen to have some slow times, I can work in a row of stitches here and there.  I finally finished a new scarf, and I'm pretty happy with it.  It's an easy pattern that looks complicated.

Another thing I need to continue to focus on/ do better at is issues with my health.  I have gotten much better at taking my medications for my blood pressure and my depression/anxiety.  Of course, saying that I remember that I am OUT of both and I need to pick up my refills at the pharmacy.  So I'm clearly not perfect at it.  I was doing well though.  I have no good reason for non-compliance with that.  It is evident very quickly when I don't have them.  I'd make a joke about just being lazy, but I know it's no joke.  I have spent over a decade looking at medical records of people who have had a stroke, and most of them have hypertension.  So I know it's not a joke.  Apparently I'm just THAT stupid.

Ok, so tomorrow morning I will pick up my prescriptions.  I'm sure the headache I will wake up with will be my reminder.  Ugh.  Dying from a stroke is not the ironic way I want to go out.  I would much prefer to trip over my dog and get stabbed in the throat by the spoonful of peanut butter I was eating. My goal in death is for a few people to start giggling at my funeral because I went out in such a ridiculous way.  That way, the flash mob won't seem so weird.